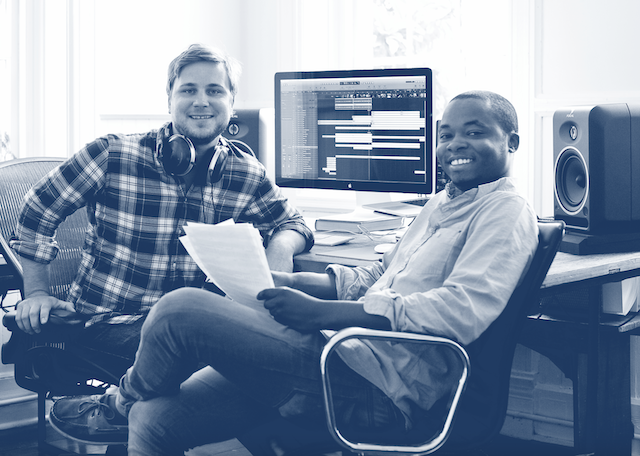 Alex Collier & Joshua Smoak (aka Eastward Music) is a Charleston, SC-based music composition studio led by award-winning composers Alex Admiral Collier and Joshua Smoak. With a wealth of experience, the duo produces original music for a wide range of media, specializing in long and short-form documentaries, advertising, and film.

After studying film score and production at Berklee College of Music, Collier and Smoak returned to Charleston to launch their own agency. As the sole operators of Sunday Entertainment, they have since composed a range of diverse music with notable placements including Google, Got Milk?, Honda, Nature Valley, American Express, TOMS Shoes, Hallmark, Liberty Mutual, PGA, Quiksilver, Brita, among others.

Both skilled composers and multi-instrumentalists in their own right, the duo are involved in many outside projects, Collier having been tapped for his organ skills in Lunch + Recess’ short film “King of Instruments” featuring collaborations with The Jingle Punks Hipster Orchestra which featured covers of Frank Ocean, Bon Iver, Kanye West, Vampire Weekend and more.

In 2013, Collier and Smoak decided to take their passion a step further and launch their studio, Eastward Music, growing their team to include both established and emerging composers, classical and jazz musicians, vocalists, and studio owners.

March 2015 brought about Eastward Music’s full-length score in Dorian Warneck’s “Color of Fire,” the intimate tale and unique perspective of Warneck’s father grappling with his post-war life after service in the German army. The score delicately, yet deliberately carries the weight of Warneck’s award-winning documentary.

The studio is growing its repertoire with a series of WW. ads, feature-length documentaries and short films.

Josh: when was the earth created?

Alex: when I met josh in grade school.

Josh: This would be a lot easier if we could just share a Spotify playlist...Hans Zimmer, all them mugs from the 90s but especially Thomas Newman and James Horner and Harry Gregson Williams and Rachel Portman and new composers like Olafur Arnalds, Nils Frahm, Johann Johannsson, Daniel Pemberton, etc.

Josh: We've been inside of the Bedient pipe organs at the cathedral of St. John the Baptist in Charleston, SC., we've torn bikes apart for our score Backpedal, we've had to work late to not disturb the lawyers in our building…

Alex: I always go back and listen to Mark Isham’s score for Crash.

Josh: mostly the only ones I know how, but drums.

Alex: Apollo duo and the plug-ins!

Alex: There is a piece I wrote for the Tokyo Sonata film trailer where I used spoons instead of hi-hats and I love how it blended with the dialogue, fx, and music.

Alex: Usually any place where you can’t run and immediately put your ideas down.

both kids, but so far the first.

Alex: Having built a long career in music and having our music heard throughout the world.

If you could join any band, past or present, which would it be and why?

Josh: A member of the 1993 original scoring stage recording of John Williams' "Jurassic Park", but not the first trumpet player.

Alex: What Josh said but also I’d want to be in any band with Quincy Jones…from any era.

What's the coolest or strangest experience your music has given you?

Josh: Alex being on set of Netflix Outer Banks

Alex: I got to play trumpet in the movie The Notebook…got to meet most of the actors and also composer Aaron Zigman.

In your opinion, what's a score (or soundtrack) that is better than its movie?

Alex: The Power of One - Hans Zimmer.

Josh: going to extend this to 2019, but I get a pass because of covid:

Alex: It’s Adele for me.

Alex: John Williams - I just want him to eventually sing what’s in his head. Can we have them both over?

Alex: I played in a brass quintet at a Taco Bell for the Spoleto festival. Definitely wasn't the right demographic. Smh.

Josh: probably both of us: cooking

Taking headphones off and listening to the world, especially my wife singing & playing guitar every night.

Alex: Grilling and doing yard work. I can do both all day.

Josh: Kacey Musgraves - Golden Hour or Dr. Dre - The Chronic, depending on my mood on the island. I'd also probably try to take it apart at some point to use the endless power source to get off the island and listen to other albums again.

Alex: Issac Hayes - Hot Buttered Soul. I think that would give me the peace to be on the island forever.

Josh: I'll leave this to Alex as his advice is usually the best.

Alex: Never let them see you sweat. This will allow you to make it out of any situation and even find success.