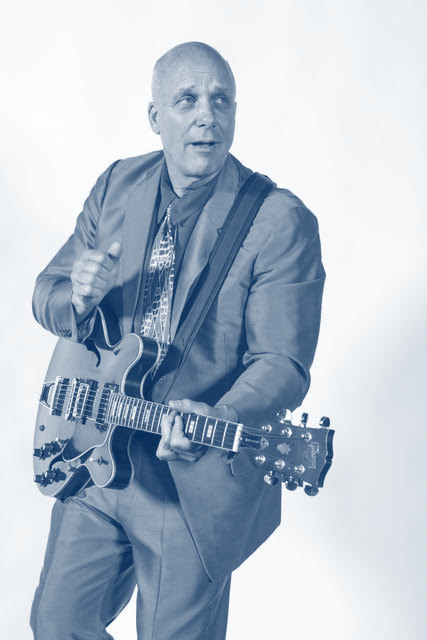 An accomplished and popular American composer, Charlie Barnett is the winner of numerous awards for his film scores. Barnett also writes music for television; his credits include Saturday Night Live, Weeds, Royal Pains, and Archer.

Barnett’s lively orchestral and chamber works are performed both nationally and internationally. His theatrical scores include 19: The Musical, a show about the fight for women's suffrage and When We Get There, a 1960’s era civil rights musical.

As a producer, Barnett has recorded scores of pop and jazz albums for labels including Def Jam and Elektra. And as a performer, he plays guitar and piano for Chaise Lounge, an eclectic jazz band that frequently appears on the national college radio charts with his original compositions.

Barnett also writes and has been heard as an occasional commentator on NPR. His essay “Hitching a Ride with Junior McGee” was included in the network’s Classic Driveway Moments compilation.

While scoring a six-part documentary series, I needed a large percussive, ringing, and unearthly sound. Outside my favorite recording studio, I found an upright piano on the street waiting for the junk man. I talked two young interns from the studio into stripping it down to just the harp and strings. We set it up in the studio and played it with a wire brush and a brass hammer. We named it the Kablangiphön. I have never found anything else that sounded like it. I would have used it on other projects, but the studio wouldn’t let me keep it there.

Heaven help me, but I love any chance I get to play my accordion. And the first instrument I ever played was the 5-string banjo. I still love playing that, especially the old-time frailing style.

As a composer: I collaborated with Dr. Maya Angelou on a piece that she performed at the lighting of the National Christmas Tree. The piece was played by the US Navy Band and a choir, to accompany Dr. Angelou reciting her poem “Peace.” I spent several days with her at her home in North Carolina writing the sketches for this.

In civilian life: I was the chairman of the board for Maryland Youth Ballet for ten years, starting at a moment of crisis when the prior board had dissolved in conflict and the ballet school had lost its lease. During that time, I helped raise funds for and build a new state-of-the-art facility. It was one of the most stressful and ultimately satisfying things I’ve ever done.

The Man Who Would Be King by Maurice Jarre. His use of the traditional ballad, “The Minstrel Boy” makes me cry every time I hear Michael Caine and Sean Connery sing it. This is a beautiful, grand, old-school film score.

There was a French composer named Roger Roger who wrote production tracks for French TV in the 1950s and 1960s. Someone put out a CD of his music several years ago called Grands Travaux. To some, this might sound like “elevator music.” But the melodies are great, the orchestrations are clever, the performances are excellent and the recordings hold up after all these years.  If it is “elevator music” then it has reached the top floor. These tunes make me smile every time I hear them.

Oliver Nelson. There are very few jazz albums that have stood up like The Blues and the Abstract Truth has—for sixty years!. I love the recording, the playing, the writing, the arranging. I would ask him about his working methods as an arranger. He would certainly have some stories about working with Bill Evans, Eric Dolphy, Paul Chambers, Roy Haynes and Freddy Hubbard all in the same session. I somehow feel that a guy who had such an organized mind for music would be a great dinner companion.

For the past few years, I have been on a deep dive into classical Greece. I started by studying the myths and then moved on to studies of the tragedians. Lately, I’ve been learning about the pre-Socratic philosophers. The surprising thing about all of it is that all of the issues from the 5th century BCE feel so current. The rules of tragedy apply to current play-writing. The questions that Socrates asks are still unanswered. And the myths still have lessons that are important to understand.

My mother was a farm girl from Maine. Once, when I was complaining to her about not having enough work, she said: “When we had downtime on the farm, we would go to the shed and sharpen the tools.”  It was such a simple statement and was spoken without irony. But I have never forgotten it.  And whenever I am less than fully employed, I make sure to spend some time sharpening the tools of my trade.