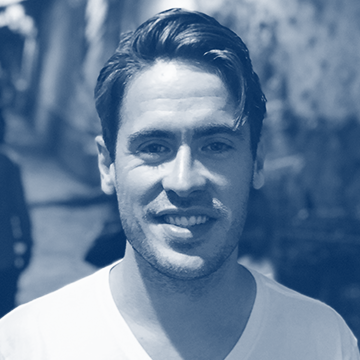 Max Farrar is a LA native who grew up surrounded by music. His father John is a successful songwriter/producer (“You’re the One That I Want”, “Physical”), and his mother Pat is a talented singer and pianist who toured the world in her twenties as a solo act and as a duo with Olivia Newton-John. His brother Sam is also a talented songwriter/producer, and is part of the music group Maroon 5.

After spending his early twenties in a band, Max eventually tried his hand at remixing. This led to producing and writing songs both for artists and commercials. He is a platinum-selling songwriter/producer with two Latin Grammy nominations, most recently writing and producing songs for Lewis Capaldi, The Script and Au/Ra. His songs have been featured in major video games such as Tony Hawk Pro Skater & Death Stranding. His commercial compositions have been licensed by clients such as Lockheed Martin, Verizon, and Activision.

I started playing piano when I was very young, so that was the true beginning. But when I was probably nine or ten years old, my dad let me borrow his Roland synth, which was the first time I used anything with a sequencer on it. I had no idea what I was doing, but it was the first time I could record and layer tracks, which really blew my mind. That was when I went from wanting to learn more piano to wanting to be a producer/composer.

There was one time I couldn’t figure out what to use as the main looping instrumental bit under a pop/rap type track, and was getting extremely frustrated. In an attempt to step away from ‘work’, I was showing my wife a new plugin I was trying called Zynaptiq Pitchmap, that would let you shift an entire piece of audio in realtime to fit a scale. I told my wife to sing something, but she isn’t a singer, and just made some gibberish sounds that were completely atonal. But I threw them into Pitchmap with the song’s chords, and magically it became this really interesting flute-like melody. So, massive accident, but it worked!

Avatone Mixcubes, although I’ve been building a new home studio, so I haven’t actually used them.

I got a Prophet Rev2 a few years back and while I don’t use it all the time, I always turn it on if I’m looking for inspiration. Fantastic sounds, and the oscillator slop knob is so cool.

What's your favorite score of the year?

Last two years I guess, but I think the music on Killing Eve is phenomenal. So unique!

Oh god. I’ll say a few.. John William's theme to the movie Sabrina always blew my mind, random I know. And I’ll always love Debussy’s Clair de Lune and Reverie. Lastly, the music of the first fifteen minutes or so of Up… I cry every time, without fail.

It’s hard to nail down a favorite composer but I do think Hans Zimmer was probably the most impactful for me, especially with the Inception soundtrack. It really sparked renewed interest in composition for me, and drove me to learn a lot more synthesis.