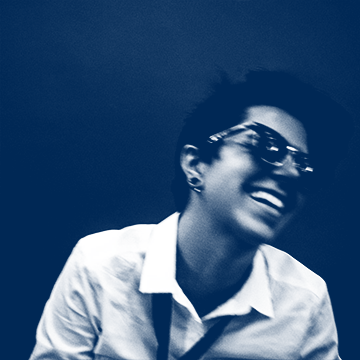 "Uniting people who on the surface may seem to have little in common" - Drum! Mag. Such is the case with Los Angeles based drummer/percussionist, Nicole Grant, better known to friends and fans alike as, Nikki G. With her versatile musical background, performing in everything from symphonies to punk bands, she has built and manages to maintain a musical and spiritual bond beyond measure. With her unique abilities, not only as a drummer, but as a multi-instrumentalist, performer, producer, and composer it's no wonder this independent musician’s versatile side of life has opened ears and eyes everywhere.

I was born into a musical family, in fact we are celebrating 100 YEARS of musicians throughout our family line so the journey arguably started since the day I was born (…which my parents had to leave a musical they were performing in when my mom went into labor, soon to return the next day as I slept a day old in the orchestra pit). Officially my personal musical journey began when I was four years old, I started on the piano with my mom who’s a classical pianist and from there, ironically, it was my mom who chose what would become my life’s passion, DRUMS.

I’ve always been all over the musical map, if you look at my resume I’ve been fortunate to be involved in many different groups from orchestras, punk rock, funk and street drumming ensembles. So when I’m composing I have the same eclectic approach and can find inspiration from John Phillip Sousa, John Williams, George Clinton, to Rancid.

The world is literally my musical playground and a lot of things I use in tracks are “incognito" everyday items. One time in the studio I really wanted to get a big bass drum sound from a big plastic trash can but just striking it with a mallet wasn’t enough, so I taped it to two chairs leaving the opening in between the chairs while balancing on a stool, hovering over several microphones and with my “tiny but mighty” striking power I finally got the BIG BOOM!

Straight outta the 1990s, it’s my good ol’ Casio MK-1630 keyboard. It’s been with me since I was a teenager and has been the very foundation that’s gotten me some of my biggest gigs. We go way back and it goes to show you that you don’t always need the fanciest equipment or the latest and greatest to make impactful music.

It seems a bit cliche, but the first score I felt intensified the importance of music supporting an impactful story was Star Wars. I come from a very small town and we didn’t have much access to the outside world, but when my dad showed me Star Wars my mind was blown. I just wanted to listen to the music over and over and over…

Flash forward, getting the opportunity to see the one and only John Williams conduct the LA Phil at the Hollywood Bowl brought instant happy tears. It wasn’t just to see one of the greats in action but to see the essence of what music can do, unite all walks of life. It’s a timeless score that has brought more people together than we may realize and it’s one score I’ll always cherish.

I was a member of a street drumming group for the better part of a decade that toured throughout the US and Canada but also had a residency at Knott’s Scary Farm. We performed on everything from trash cans, barrels, pipes, auto parts, and had the occasional power tool. Never did I ever think that street drumming would become such a huge chapter of my life, but still to this day I am grateful for the experience and definitely have a lot of interesting stories…

“The show must go on…” figuratively and literally. Growing up in a musician-filled household and becoming a professional at a very young age, this lesson was constantly taught and shown to me on a daily basis. It’s something that when you are a performer, you give your all while deeply respecting and holding great responsibility behind the privilege of being able to express one's passion through music (…the show must go on can also be in a literal sense of the one time I accidentally cut my arm open with a metal grinder during a show but continued to finish the show to eventually bow, exit, and be rushed to the hospital. Not recommended, DO NOT try that anywhere.)

The biggest lesson of all inside the saying “The show must go on…” is perseverance. Perseverance is key to the greatness life has to offer, it may not always be an easy ride or go as we planned but if you stay steady on the course towards betterment you’ll reach the unimaginable or as my family always says “Vita Brevis Ars Longa” life is short, but art lives long so make every note count.