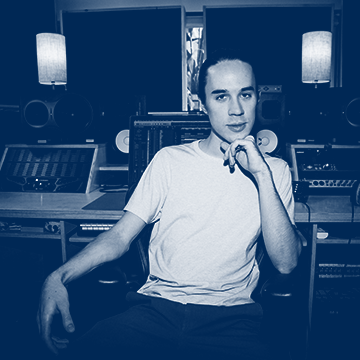 Tano Brock is a San Francisco-born producer, songwriter and mix engineer based in Los Angeles, CA. He grew up in a musical family, and began playing numerous instruments at a young age. In his early teenage years, Tano discovered the world of recording and production, and became infatuated with writing and producing his own music. This jump-started his career as an artist, songwriter and producer, leading him to release a completely self-made album at the age of 18. Tano’s music has been featured in ads for brands such as Verizon, Netflix, Microsoft, Adobe, Uber, Salesforce and more. He also works regularly as a producer and mix engineer, working with artists such as up-and-coming reggaetón performer La Doña, and singer-songwriter Anna Shoemaker.

I have been surrounded by music for as long as I can remember. Both my parents are musicians, so music was a central part of my family household growing up. I started studying darbuka, a Turkish/Middle Eastern drum, when I was six years old, and began piano lessons a year later.

Paul McCartney first and foremost—The Beatles’ music was the first music I truly fell in love with, and Paul’s songs specifically have had a huge influence on my songwriting. As far as more contemporary composers/artists go: Ryan Tedder, Khalid, The Weeknd, Rosalía, Cautious Clay, Kehlani; to name a few.

This may not be so strange, but it was an amazing happy accident. I was working on a song with my partner Aya Safiya, and we were on opposite coasts working remotely. I sent her a track with an instrumental framework and a single lead vocal part. She experimented and recorded A LOT of takes of slightly different background vocal lines, playing around with different ideas. When she sent me the files, I imported them into my session, and pressed play to take a listen. I intended to solo the first track to hear each part individually, but I apparently didn’t press the solo button. Before I was able to press pause, there was a 50+ person gospel choir singing through my monitors. I was absolutely blown away. This accidental choir became a key part of the song. The song is called “Oh Me Oh My."

Baking! In recent years I’ve gotten really into cooking, especially baking. I am one of many who fell into sourdough bread baking during quarantine, and it has definitely stuck. Making sourdough bread forces me to be patient, work with my hands, and really connect with my sense of touch—the perfect contrast to working with my ears all day.

If I was answering this question a few years ago, I would say saxophone—sax & clarinet have become my primary instruments in the last decade, but recently I’ve fallen back in love with electric guitar! Channeling my 13-year-old rock band self.

This wasn’t technically a purchase, but Kali Audio just sent me a pair of their new IN-8 coaxial 3-way monitors, and I am absolutely loving them. Game changers for me.

Professional: This one is sort of a combination of pride and gratitude, but I am proud and very grateful that I have never had to have a job that isn’t music-related. This is something I’ve always hoped to achieve, and so far so good!

Personal: Bringing it back to food again…When I put a lot of time and effort into making food, serving the finished product to friends and family and enjoying it with them always brings me lots of pride and happiness.

Right now I would say Bad Bunny. His stuff just slaps so hard.

This one is really hard. It would probably have to be a Beatles album. I’m gonna go with…Abbey Road.